I have been a massage therapist for over twenty years. It is a profession that I never 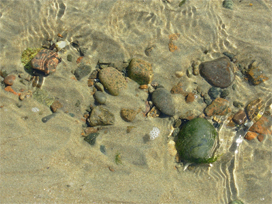 expected to be doing. In 1985 I started training as, what was called at the time called a holistic healer. Training for Healers was a two year program at the Center of the Light in New Marlborough, MA that was designed to enhance the work of all practitioners of healing arts, including doctors, phsycologists, chiropractors, mom and dad wanabees. It covered anatomy and physiology from both a western and eastern perspective, something that at the time was revolutionary. Many of the things that we were trained to do, such as Cranio- Sacral Therapy, a now commonly used physical therapy tool, were so completely off the charts that they were laughed at for being non-sensical. Healing herbs and nutrition? Not even on the radar. But luckily for us, people like Eva and Gene Graf, who had direct experience with so many of these simple and incredibly effective techniques, chose also to extend what they had learned from people like John Uppledger in the 1960’s and 70’s to students like me.

I would like to say that my intention was to be an herbalist with nutritional leanings ( I love to cook and I love good food, especially vegetarian stuff with lots of garlic) and that I was really good with those things. Ok, I was pretty good with them, but nothing compared to my abilities as an energy worker and massage therapist. Though my strength as a bodyworker originally lay in the combination of Reiki and Cranio-Sacral Therapy, in the mid 1980’s people would look at me and go “oh… really… isn’t that interesting… uh…” Pretty quickly it became clear that if I was going to be able to use any of what I learned, massage therapy was probably the most readily acceptable approach to take. People like Bob King, the creator of what is now known as Sports Massage, were managing to bring the idea of massage therapy to the masses. For those baby boomers and their kids who were going sports crazy, especially those runner types, massage was suddenly an acceptable and even fashionable thing to have done. Add to that the power coming from the energy work and my passion for enhancing wellness, both my own and others, my practice was born.

I have trained with people who are now famous clinicians in their own rights, people like Linda Burnham, the creator of Facial Rejuvenation and Tom Myers, the creator of Anatomy Trains. Linda was my primary teacher at the Center of the Light, teaching what was in those days called the Graf Body System (copyright thingy needed), a program covering anatomy and physiology from both a Western and Eastern perspective. In addition to basic A/P, it also covered what one can do as an individual to heal and maintain each body part herbally, nutritionally and physically, using what they called contact points (specifically placed pressure points throughout the body, many of which corresponded to acupuncture points). Tom agreed to become my mentor for just over a year as he was pulling together the many pieces that became Anatomy Trains. His background in Rolfing had brought him to Cranio-Sacral Therapy as my background in Cranio- Sacral Therapy had brought me to Deep Tissue Sculpting (Carol Osborne-Sheets work, taught in Bodywork for the Childbearing Year). Adding Tom’s extraordinary understanding and study of structural kineseiology combined with his deep understanding of the fascial structure of the body gave a 3 dimensionality to my work as a massage therapist that I otherwise would have probably missed.

In 1990 a recession hit and as I was no longer financially able to maintain a private practice, I began working in Canaan, CT with chiropractor David Godwin, an association that lasted over ten years. Working with a variety of types of injuries and disorders is how much of the work I do today was created, work I describe as structural re-integration. It was at Dr. Godwin’s that I began to work with people who had been in auto-accidents, largely whiplash related injuries, as well as sufferers of migraine headaches, people who were wheelchair bound as well as people who were trying to take the best possible care of themselves so they could be as comfortable as possible as they came to the end of their lives. I suppose that is where I became as connected to the structure of the spine and how connected it is to how the rest of the body functions, or doesn’t.

I love working with people who want to feel as well as possible, doing what I can to empower them in their wellness plans. I love working with women as they move into the state of motherhood (regardless of how many times they’ve done so). It is especially rewarding work to do after the babies are born. The post partum work allows the mom to be taken care of, at least for the hour she is on the table. It is also a chance to share in the pleasure and power of therapeutic touch by teaching them about infant massage. Then there are the horses and their owners. The equine massage I do came out of a passion for my quirky crew of horses, that ultimately turned into therapeutic modality. The work, based in both Equine Sports Massage Therapy and pattern riding designed with the horse, allows horse and rider to connect on a physical and intuitive level that is magnificent for both as athletes and partners.

I am an athlete and an artist. I started out as a potter, musician and dancer, all of which culminated in being a dancing rider of horses (at least in my heart , if not always obvious to the casual viewer). An over thirty year practice of Iyengar based Hatha Yoga and trail running, I have also been an aerobics and fitness teacher and am currently a ski instructor working to a PSIA Level II certification. Needless to say I have also had a ludicrous number of accidents, both major and minor. I have come to implicitly trust the power and simplicity of massage therapy, incorporating as a basic part of my own wellness practice. Without it, and the experience I’ve had with it both as a practitioner and receiver, I don’t know that I would be where I am today. At the end of the day I feel incredibly lucky to be able to share what I do and what I’ve learned in over twenty years of providing wellness support through the use of massage therapy.

For more information, I can be contacted either by calling 413-329-5573 or by email. Make sure the subject line is “questions about massage therapy”,otherwise you might find yourself junked!